Samsung recently announced its Galaxy S10 series with four phones – Galaxy S10, S10+, S10e, and S10 5G variant. On all three phones, except Galaxy S10e, Samsung has used Qualcomm’s new ultrasonic in-display fingerprint sensor, which is said to be more accurate, secure and work across a range of conditions than the optical in-display fingerprint sensor.
So, how does the ultrasonic fingerprint sensor in Samsung Galaxy S10 works? “When you touch the display, there is an electrical signal that is sent to the sensor and that signal is converted in to a pressure wave that goes and hits your finger and then gets reflected back,” Gordon Thomas, Director, Product Management – 3D Sonic Fingerprint Sensor at Qualcomm Technologies said in a media roundtable at the Mobile World Congress in Barcelona.
The advantage with an ultrasonic fingerprint sensor is it works with wet fingers as well. The technology uses light from the display so users will not see that bright light shining from the display all the time as with optical sensors.
The technology is also more durable, claims Qualcomm and is not affected by image blur. According to Gordon, optical sensors have this issue where the phones get damaged in the fingerprint area over time, say a year and a half. It is also said to work well in bright sunlight.

The advantage of having an ultrasonic fingerprint sensor is that it works with wet fingers as well.

How ultrasonic fingerprint scanners work
The new fingerprint reader is “ultrasonic,” meaning that it uses sound waves to detect a three-dimensional image of your fingerprint. Those sound waves bounce off your finger and return to the phone, allowing it to see the ridges of your print as well as the depth of those valleys.
Qualcomm’s 3D in-display ultrasonic fingerprint scanner is based on what used to be called Sense ID. Rather than existing photographic or capacitive-based fingerprint scanners, ultrasonic fingerprint scanners make use of very high-frequency ultrasonic sound. You can’t hear it, but these waves are used to map out the details of the user’s fingerprint. Fortunately, there’s no need to swipe, just touch the finger to the sensor like the top of the line capacitive fingerprint scanners.
To actually capture the details of a fingerprint, the hardware consists of both a transmitter and a receiver. An ultrasonic pulse is transmitted against the finger that is placed over the scanner. Some of this pulse’s pressure is absorbed and some of it is bounced back to the sensor, depending upon the ridges, pores and other details that are unique to each fingerprint.
There isn’t a microphone listening out for these returning signals. Instead, a sensor that can detect mechanical stress is used to calculate the intensity of the returning ultrasonic pulse at different points on the scanner. Scanning for longer periods of time allows for additional depth data to be captured, resulting in a highly detailed 3D reproduction of the scanned fingerprint.
Qualcomm notes that there’s about a 250-millisecond latency for unlocking, roughly equivalent to capacitive fingerprint scanners. The sensor has about a 1 percent error rate, which again is pretty comparable to other scanners.

Pros of ultrasonic fingerprint vs capacitive scanners
Ultrasonic fingerprint technology works very differently to capacitive fingerprint scanners, which are only able to reproduce 2D images. 3D details are much more difficult to forge or fool than a 2D image, making the ultrasonic system much more secure. It goes without saying that ultrasound is also much more secure than optical fingerprint scanners, which have all but fallen out of favor.
Another added perk of this ultrasonic fingerprint scanner technology is that it allows the fingerprint scanner to still operate through thin materials, such as glass, aluminum, or plastic. The sensor is just 0.15 millimeters thick and can scan through up to 800 µm of glass and up to 650 µm of aluminum. Therefore, the scanner can be embedded under the case or under the display as we’re seeing in the Samsung Galaxy S10, allowing for a more discrete look and thinner bezels.
Because the sensor uses ultrasonic waves, the sensor can also double up as a health tracker that can record heart rate and blood flow. Additionally, there’s less chance of damaging the sensor or exposing it to external tampering, and sweat or moisture on the finger won’t interfere with the scanning process either. 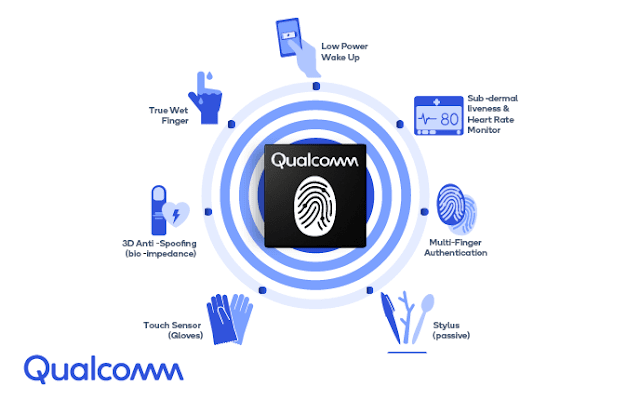 Scanning is just half the process
Of course, there’s still plenty to be done with this fingerprint data and keeping it secure is an equally important part of the system.
As will all biometric security systems, processing and security highly sensitive personal information security are key. Qualcomm’s processors are built with dedicated security tools, including Cryptographic Accelerators, Key Provisioning Security, and a Trusted Execution Environment. This ensures that the processing and storage of sensitive data are kept well away from malicious applications. Other Arm-based processors offer TrustZone hardware isolation for similar levels of protection.
Qualcomm’s setup is also designed to support the Fast Identity Online (FIDO) Alliance protocols, which can be used for online password-less authentication. FIDO does this without transferring any of the confidential fingerprint information to the cloud or through networks that could be compromised.
Ultrasonic fingerprint scanners certainly have a number of advantages of existing capacitive implementations and given the prevalence of Qualcomm processors in mobile products. 3D ultrasonic fingerprint scanners are now ready for prime time and it’s possible that we’ll see many more manufacturers adopt this technology throughout 2019.