Type of Touchscreen and How They Work!


Almost all modern smartphones are equipped with Touchscreen. But not all know how it works! Today you will know it and more about this smartphone detail.

Touch screens are no longer too expensive. In addition, the touchscreen today is much more “responsive” - the user's touch is recognised just fine. It is this characteristic that paved the way for a large number of users all over the world. Currently, there are four main designs of touchscreens:

If the computer registers a change in conductivity, following pressing the screen, directly between the layers of the sensor, in resistive touch screens, the capacitive sensors record the touch directly.
The human body, skin, are good conductors of electricity and have an electrical charge. Usually, you notice it walking along a woollen carpet or removing your favourite sweater, and then touching something metallic. We are all familiar with static electricity, experienced its effects on ourselves and saw tiny sparks breaking from our fingers in the dark. A weaker, imperceptible exchange of electrons between the human body and various conductive surfaces occurs all the time, and it is precisely this which is fixed by capacitive screens.
The first touchscreens of this kind were called surface-capacitive and were a logical development of resistive sensors. They have only one conductive layer, similar to the one that was used earlier, installed directly on top of the screen. Sensitive electrodes also joined him, this time around the corners of the touch panel. Sensors that monitored the voltage on the electrodes and their software were made much more sensitive and could now detect the slightest changes in the flow of electrical current across the screen. When a finger (another current-carrying object, such as a stylus) touches the surface with a surface-capacitive touchscreen, the conductive layer immediately begins to exchange electrons with it, and the micro-controller notices.
The appearance of surface-capacitive touchscreens was a breakthrough, but because the conductive layer applied directly over the glass was easily damaged, they were not suitable for devices of a new generation.
To create the first smartphone required projection-capacitive sensors. This type of touchscreen quickly became the most common in modern consumer electronics: smartphones, tablets, laptops, all-in-one computers and other consumer devices.
The top layer of the screen with a touchscreen of this type has a protective function and can be made of tempered glass, for example, the famous Gorilla Glass. Below are the thinnest electrodes that form a grid. At first, they were put on each other in two layers, then, to reduce the thickness of the screen, they began to be placed on the same level.
Made of semiconductor materials (indium tin oxide), these conductive hairs create an electrostatic field at their intersection.
When the finger touches the glass, due to the conductive properties of the skin, it distorts the local electric field at the nearest intersections of the electrodes. This distortion can be measured as a change in capacitance at a single grid point.

Since the array of electrodes is made quite small and dense, such a system is able to track the touch very accurately and easily captures several touches at once. In addition, the absence of additional layers and layers in the sandwich of the matrix, sensor and protective glass has a positive effect on image quality. True, for the same reason, broken screens are usually replaced completely. Once assembled together, a screen with a projection-capacitive sensor is extremely difficult to repair.
Nowadays, the advantages of projection-capacitive touchscreens do not sound like something amazing, but at the inception of the smartphone era, they provided the technology with tremendous success, despite the objective drawbacks - sensitivity to pollution and humidity. 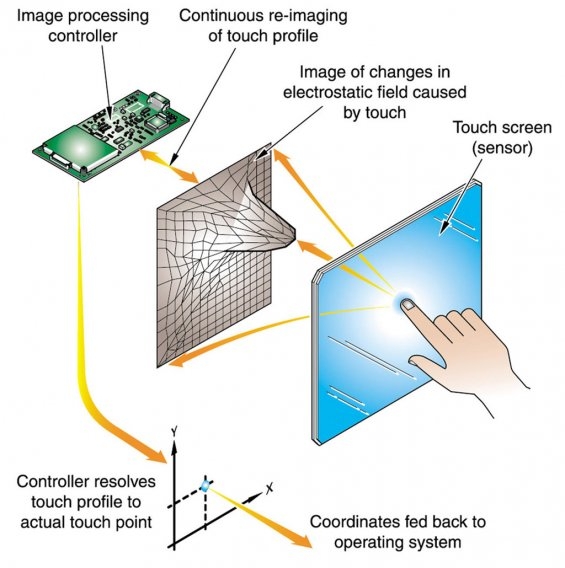 At the ends of the axes of the grid of the glass screen is two transducers. One of them is a transmitter, the second is a receiver. On a glass base, there are also reflectors that “reflect” an electrical signal that is transmitted from one to another transducer.
The transducer receiver absolutely “knows” whether it was a press and also at exactly what point it happened because the user interrupts the acoustic wave with his touch. At the same time, the wave display glass does not have a metallic coating - this makes it possible to save 100% of the original light in full. Such screens can transmit light, they are durable since there is no sensitive coating and there is no mechanical touch at all. In this regard, the wave screen is the best option for those users who work in graphics with fine details, because resistive and capacitive touchscreens are not ideal in the issue of image clarity. Their coverage delays the light, which as a result significantly distorts the picture. However, such displays currently do not meet high accuracy and are afraid of any contamination. But time diagonal frame of such a display can reach 150 inches. 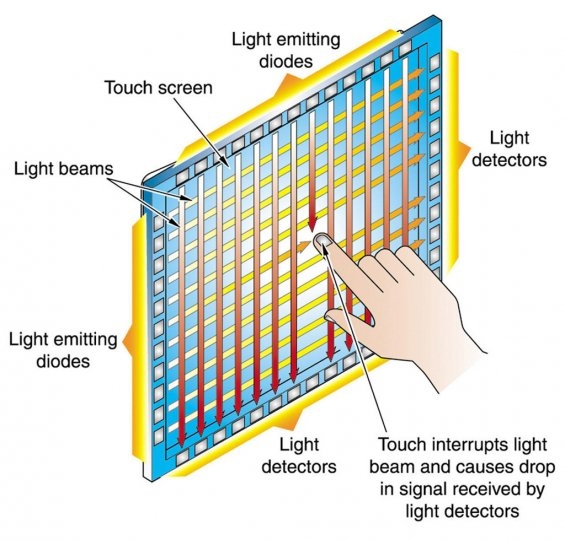 The simplest form is a four-wire one, which consists of a special glass panel, as well as a plastic membrane. The space between the glass and the plastic membrane must be filled with micro-insulators, which can reliably isolate conductive surfaces from each other. The surface of the screen is covered with a special material that protects it from mechanical damage, such as scratches.
Electrodes, which are thin plates made of metal, are mounted over the entire surface of the layers. In the back layer, the electrodes are in a vertical position, and in the front layer - in a horizontal position so that the coordinates can be calculated. Electric charge in the process of the user with the touchscreen passes through these two layers. If you click on the display, the panel and the membrane automatically close, and a special sensor will perceive the pressure, converting it into a signal.
How does this happen?
The user at a certain point touches the screen and the elastic upper layer comes into contact with the conductor layer - only at this point. Then the computer determines the coordinates of the point that the user touched.
When the coordinates become known to the device, the special driver translates the touches into commands known to the operating system. In this case, you can make analogs with the driver of the most ordinary computer mouse, because it does exactly the same thing: it explains to the operating system what the user specifically wanted to tell her by moving the manipulator or pressing a button. With screens of this type use, as a rule, special style.
The most advanced type is eight-wire displays, which are distinguished by a high level of accuracy. However, these screens have a low level of reliability and fragility. If it is important that the display is reliable, it is necessary to stop the choice on its five-wire form. 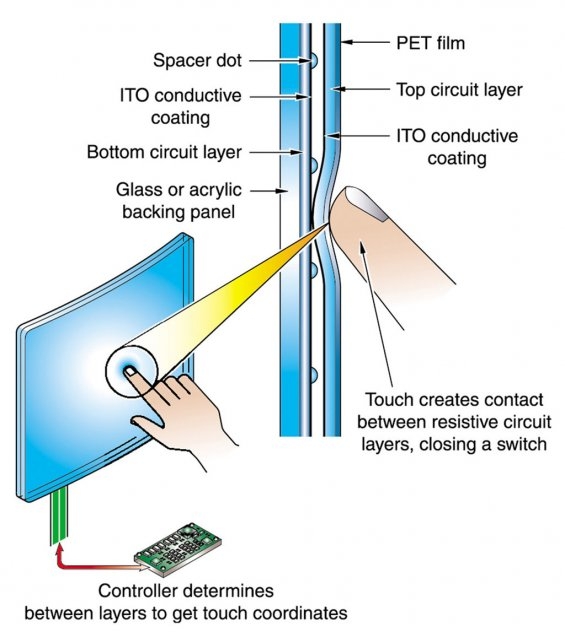 Resistive screens can be detected in relatively elderly devices. Just such a touch screen is equipped with IBM Simon - the oldest smartphone of those that were recognized by our civilization. 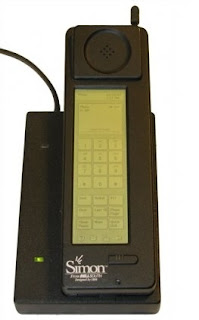 4. Pressure Sensitive Touch Screens - 3D Touch.
The original predecessor of pressure-sensitive touchscreens was Apple’s proprietary technology, called Force Touch, used in the company's smartwatch, MacBook, MacBook Pro and Magic Trackpad 2.After testing on these devices, interface solutions and various scenarios for the use of recognition of the force of pressing, Apple began to implement a similar solution in their smartphones. In the iPhone 6s and 6s Plus, the recognition and measurement of pressure has become one of the functions of the touchscreen and received the commercial name 3D Touch.
Although Apple did not hide the fact that the new technology only modifies the capacitive sensors we are used to and even showed a scheme, in general, explaining the principle of its operation, details about the design of touch screens with 3D Touch appeared only after the first new-generation iPhones were disassembled by enthusiasts.In order to teach the capacitive touchscreen to recognise presses and to distinguish between several degrees of pressure, the engineers from Cupertino needed to rebuild the touchscreen sandwich. They made changes to its separate parts and added another new layer to the capacitive one. And, interestingly, by doing this, they were clearly inspired by outdated resistive screens.
The grid of capacitive sensors remained unchanged, but it was moved back closer to the matrix. An additional array of 96 individual sensors was integrated between the set of electrical contacts that monitor the place of touch to the display and the protective glass.His task was not to locate a finger on the iPhone screen. With this, the capacitive touchscreen still coped well. These plates are needed to detect and measure the degree of bending of the protective glass. Apple specifically for iPhone ordered Gorilla Glass to develop and manufacture such a protective coating that would retain the same strength and, at the same time, be flexible enough to allow the screen to respond to pressure.
On this development, it was possible to finish the material, which tells about touch screens, if it were not for another technology, which several years ago had a great future.

In a very short time, touchscreens conquered the world of electronics. Despite the lack of tactile response and its other drawbacks, touch screens have become a very intuitive, understandable and convenient method for entering information into computers. Last but not least, they owe their success to a variety of technical implementations. Each with its own advantages and disadvantages, suitable for its class of devices. Resistive screens for the cheapest and mass gadgets, capacitive screens for smartphones and tablets and desktops with which we interact every day and infrared touchscreens for those cases when the design of the screen should be left intact. In conclusion, it remains only to state that the touchscreens are with us for a long time, they will not be replaced in the near future.